UP Express -- A customer view 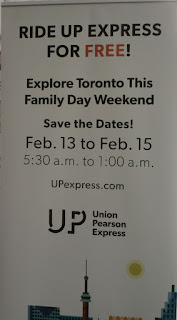 This past weekend we decided to try out the new UP Express that goes between Union Station in downtown Toronto to Toronto Pearson Airport. One reason that we did it this weekend (February 14th) was UP was offering it for free as part of family day activities in Toronto. We had looked at it a couple of times but as we haven't had any trips to the airport since it opened we hadn't had a chance to try it prior to this. This weekend gave us the opportunity to try it out and see if it is a means of getting to the airport for us.

I wanted to compare how long it would take to get to the airport from our place using UP Express versus the other ways of getting there.

TTC to Union and then Up Express – 90 minutes – actual trip on Sunday and we waited for an Up Express to arrive at Union so that was about 10 minutes otherwise the trip could have been 80 minutes.
TTC from home to airport – estimated time 78 minutes (if everything works well and no delays on the subway or traffic issues on the 427)
Driving – estimated time 38 minutes not during rush hour, and hour and 5 minutes during rush hour and this doesn't include parking the car at the airport.
Limo – same estimated time as driving myself without the parking challenges.

Signage at Union Station – The signage that I used wasn't the best as I ended up missing one sign that showed me that I needed to go upstairs in Union Station and I ended up in the York Concourse and had to backtrack a little bit. I think the signage problem is due to Union Station itself being under renovation.

UP Express Station – Union Station – this station is very open and organized and they were ready to expect a lot of travellers especially this weekend when it was free. There were signs showing where to line up for “Family Day Activities” and signs showing the Travellers where they were to go. When we arrived there wasn't any line up and the staff were very friendly and were able to explain things to us. There was a train at the station when we got there but it was fairly crowded so we decided to wait for the next one. There are charging stations at the station so you can top up your mobile devices while waiting for the train.

The Train – The actual train is very comfortable and there are quite a few seats and they do face both directions so that if you need to face the way you are travelling you would normally be able to do that. Given the free rides it wasn't always doable but that wasn't something that I even considered on this trip.

The Trip – The actual trip does take about 25 minutes from station to station with two other quick stops at two other stations along the way. Both of the stops are announced with what transit connections are available close to these stations. The ride is very smooth and you can look out the windows and see the actual traffic that you are passing on the highway in some sections of your trip.

Trip Back – We did have a bit of a wait for the return trip from the airport but again they were ready for the volume of people and it went smoothly. 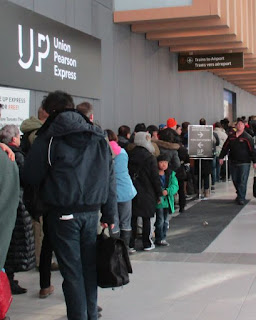 Given that we took the Up Express during an extremely busy time I was very impressed with how professional the staff where even with the additional pressure that they were under. The volume of people that rode the train this past weekend to and from Pearson just for the experience was amazing. At times there were line ups at Union Station of between two and three hours for people just wanted the experience. What I did like was that the travellers and airport staff were given priority boarding at both ends of the trip and I total agreed with that. These are the people that are going to make the service stay around for the rest of us.

I would love the opportunity to do this trip again during normal business to see it operating under normal circumstances. I would really consider taking UP Express to or from the airport in the future if my flight worked well. I won't want to have to get downtown during rush hour with luggage but other than that it is a means of transportation that I would use. If you are downtown I would recommend it as a means of getting to the airport and avoiding the Toronto traffic that we have.

For UP Express to be good for two people going from Pearson to downtown or the other direction the fare should be comparable to taking a Limo from a hotel that is very close to the station. A Limo is $48 and two tickets for UP without a Presto pass is $55 so it is a little more expensive. For one person travelling it is cheaper to take UP as the ticket is only $27.50 one way or $44 return. These are the prices without the Presto pass as Presto pass rates are $19 each way.

For UP Express I would also show some of the times of getting to or from the airport in a Limo or other transit to show the comparison to the train. For a lot of cities 25 minutes is a normal commute to downtown but in Toronto 25 minutes doesn't get you to the airport from downtown unless there is no traffic. Google Maps shows it can often be over an hour at time either way.

Email ThisBlogThis!Share to TwitterShare to FacebookShare to Pinterest
Labels: UP Express