People on a roof 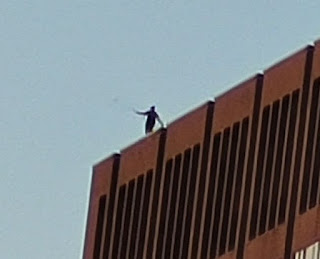 A couple of nights ago, we were sitting outside, and we noticed something rather odd. I thought at first there was something stuck on one of the towers on an apartment building near us, but then it moved, and I figured out it wasn’t something stuck it was a person climbing the towers that are on the roof of a building.

It was a Sunday evening, so that meant that it shouldn’t be someone trying to do repairs because most people will either do it during the week or at least in the middle of the afternoon on a weekend. This happened just before 8 pm, and it looks rather odd. What also made it look strange was it looks like the person might have had a selfie stick and was taking pictures from the top of the towers and stepping on the antennas. The person descended the one tower and then immediately walked over and started climbing a second tower on the roof without any safety harness. We continue to watch this while trying to figure out who to call to notify the building of the issue. While trying to find phone numbers, my husband decided to call the local police department to report it and was put on hold. We then saw someone on the neighbouring building which has the same owner, so two different people on two building roofs taking pictures. 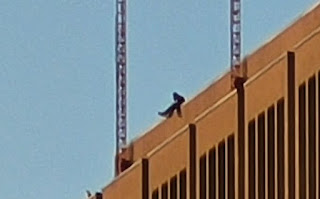 After quite a bit of digging, I was able to find an emergency phone number for the buildings and let them know about what was happening on the roof of the two buildings. It was amazing when the immediate response that I got was that there couldn’t be anyone on the roof because the alarm hadn’t gone off, and it was a locked door. I ended up talking with the superintendent of one of the buildings, and he took me seriously and said that they would look into it. Yes, it was an issue as these people were climbing towers and possibly damaging the antennas just to get some pictures and videos.

What ended up being very interesting was the person that we saw on the second building disappeared only to appear on the first building with the other person, so we had two people on a roof running around with selfie sticks and taking pictures. This issue continued for almost an hour that we are aware of when suddenly, the two people disappeared, this was just when the sun was starting to set and an ideal time for pictures. We think we spoiled their fun and some great pictures. Hopefully they were caught by security because it was a dangerous situation, and they should never have been up there in the first place.

When you see something that looks way out of the ordinary, it is best to let someone know because you never know what could happen. We were worried that either the people would get injured or stuff on the roof would get damaged. Somehow these two people out for some fun got onto a roof over 44 storeys up without alarms being sounded. I think these two buildings will be investigating how that happened.